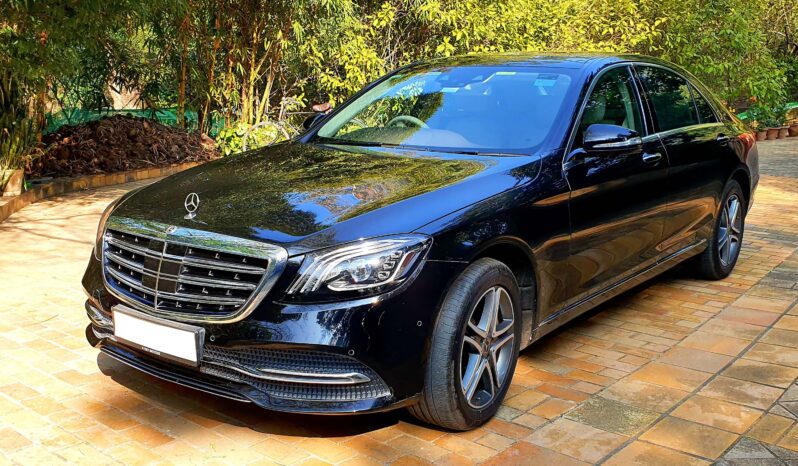 You’ve already seen our review of the diesel-powered S-class, the facelifted S 350d, with its revolutionary new engine that has been extensively re-engineered for India to meet 2020’s BS-VI emission standards, despite running on 2018’s BS-IV fuel. This S 450 is the six-cylinder petrol variant, but unlike the diesel, it’s not a new-generation straight-six engine, but instead, the old 3.0-litre V6 (formerly called the S 400) reworked to produce more power. We never got a chance to test the S 400, so this review should tell us a lot about this engine; and since ultimate refinement is what you want from a car like the S-class, perhaps this will prove to be even better than the already polished diesel.

We’ll gloss over the things that are common with the diesel variant, such as the exterior and the interior. The facelift is pretty standard stuff – revised headlamps, tail-lamps, grille, bumpers and wheels that, combined, give the S-class a slightly more aggressive and imposing look – which is intentional, say the designers – but some of that regal elegance has been lost in the facelift.

As in the diesel, everything is superbly crafted and incredibly luxurious. There’s a new 64-colour ambient lighting system, and you now get wireless charging for your phone at the front and rear, although the rubber cradle at the front feels a bit flimsy for an S-class and isn’t big enough to accommodate large ‘plus size’ smartphones.

When it comes to the driver interface, there’s a new steering wheel that now features many more controls on it, including Cruise Control. It also gets the new dual mini touch pads that debuted on the E-class, which, by far, are the best for controlling the COMAND interface on the go. The dual 12.5-inch screens for the infotainment and instrumentation appear sharper and now have a few options for their appearance – including a decidedly un-limo-like ‘Progressive’ look, with a digital speedo, the tacho in the centre and a G-force meter on the side. What’s nice, however, is that they are deeply customisable to show various readouts other than just a speedo and tacho. But of course, the highlight of an S-class is the comfort, and as ever, it’s hard to fault this.

A few things have been deleted from the front seats like the massage, memory and cooling functions, which is unusual in a Rs 1.4 crore car, but the back is where it’s at. The rear seats fold out and recline by 43.5 degrees, and get heating, cooling and massaging function, with memory. The left-rear passenger even gets an ottoman to prop their calves on, and the left front seat folds away for maximum legroom. Frankly, though new rivals do come close, it’s hard to imagine any of them offering a better back seat experience than this.

Dynamically, it’s no different from the diesel S 350d. It too gets air suspension at all four ends that delivers a supreme ride quality like few other cars can. You’d have to find a pretty big pothole, speed breaker or bump to hit to elicit anything close to discomfort from this car; it’s almost worth those uninteresting-looking 18-inch wheels, when you realise they’re wrapped in tall 50-profile rubber that no doubt adds to the comfort. It does get a little bit too wallowy at high speeds if the road is undulating, but that’s when you should switch to Sport mode. Be under no illusion; this doesn’t make it a sporty handler, but instead, it just contains the body movements much better. Similarly, the steering does weight up in Sport mode, but it is engineered too slow and mushy to ever be dynamically engaging. And that’s fair enough in a limousine.

That said, and since this is a petrol variant, can you expect a whiff of performance when you choose this over the diesel? Certainly, with 367hp and 500Nm of torque (up by 34hp and 20Nm from the old S 400) and a claimed 5.1sec 0-100kph time, it would seem that way on paper. It also has the advantage of the newer, cleverer nine-speed automatic, compared to the seven-speed unit in the last car.

It is impressively brisk off the line, the gearbox quietly whizzing through the first handful of gears. It doesn’t have that effortless mid-range surge that you get from the turbo V8 or V12 motors, obviously, but what it has instead is a surprisingly sporty nature. It does, definitely, feel quicker than the diesel, despite a 100Nm torque deficit. The power delivery is smooth and comes in really strong from about 3,000rpm onwards. So yes, if you’re desperately late to that shareholders’ meeting, Jeeves will have a decently good time hustling you along.

But the real advantage is refinement. The new diesel is incredibly hushed, but this is nigh on silent. It’s only closer to 3,000rpm that you’ll actually hear it, and at idle, you’d have to be close to the tailpipes to even know it’s turning over.

This is a new section of our reviews that will likely become increasingly common in the coming years. The S-class facelift is a Level-2 autonomous vehicle, and interestingly, Mercedes has finally managed to provide (most of) its radar-based safety and driver assistance systems in India. These range from the cool but established automatic parking, all the way up to full-on self-driving, albeit for a limited time and highly dependent on the road conditions. Sure, Volvo was the first to bring such tech to India, but better late than never, right?

It’s all possible thanks to five radar sensors (two front, three rear), 12 ultrasonic sensors, a pair of stereo cameras and a light sensor in the windscreen, and four actual cameras that provide a 360-degree view of the car. Distronic or radar-guided cruise control lets you set a distance to the car in front and maintain it as speeds rise and fall. Active Braking Assist will warn you first, then prime the brakes, then actually brake if a vehicle stops in front of you. Blind Spot and Lane Keeping Assists warn you of cars approaching from the sides and will even brake the far-side wheels to steer you away from someone who gets too close. And finally Active Steering Assist, which will steer the car within a set of white lines for limited amounts of time; in the absence of white lines, it can be set to follow a car ahead, provided it doesn’t steer more than 21 degrees and doesn’t make any sudden manoeuvres. Put that all together and you get Level 2 Autonomy, but as we said before, it only works if the road markings are legible. It can be easily thrown off by anomalies such as erratic traffic and pedestrians or animals, all of which we have in abundance in India. So use it with caution.

We tried it in various situations on our drive and got mixed results. For example, on Hyderabad’s well-maintained Outer Ring Road (ORR) it worked spectacularly, following the road around bends at a pre-set speed, without any steering or pedal input, slowing down and speeding up with the traffic. But on smaller roads where the lane markers had faded and traffic was a bit more unruly, the systems frequently shut off as the conditions were no longer met. Also, when the lines aren’t clear, the car can weave disconcertingly until it ‘finds its bearings’ using a car in front, or the divider on the right.

The six-cylinder petrol S-class isn’t typically a strong seller, with an overwhelming majority of buyers sticking with diesel. This is also the reason Mercedes didn’t rush to bring the new-generation straight-six petrol to India and stuck with a revamp of the old V6, focusing its budgets and energies on the all-new straight-six diesel engine instead. A lot of buyers in the market looking for a petrol will also choose to upgrade to the V8-powered Maybach S-class, but while before its facelift, the price difference was a lot smaller, the jump will now cost you Rs 57 lakh! Combine this with all the new tech you get in the standard S 450 and it starts to look like better value now. Sure, you won’t get the fuel economy of the diesel, and you won’t get the more lavish, stretched cabin of the Maybach, but the V6 petrol is more refined and better performing than the diesel, and a lot more affordable than the V8 petrol. So, while it may still not be the most popular S-class to buy, it now has a lot more going for it than its predecessor.