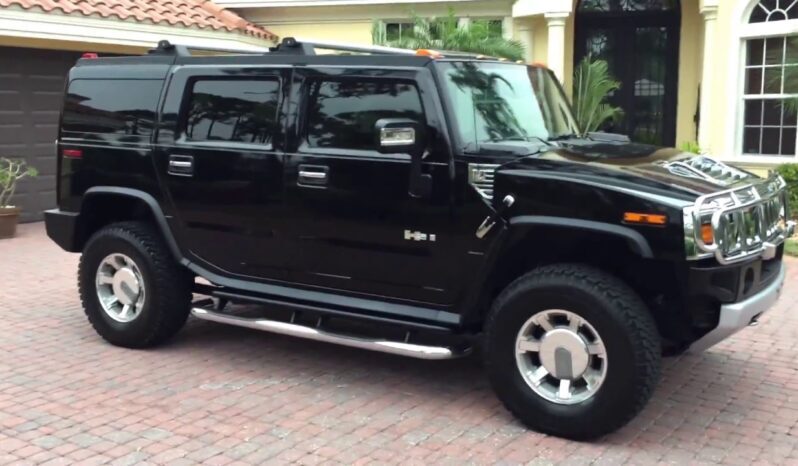 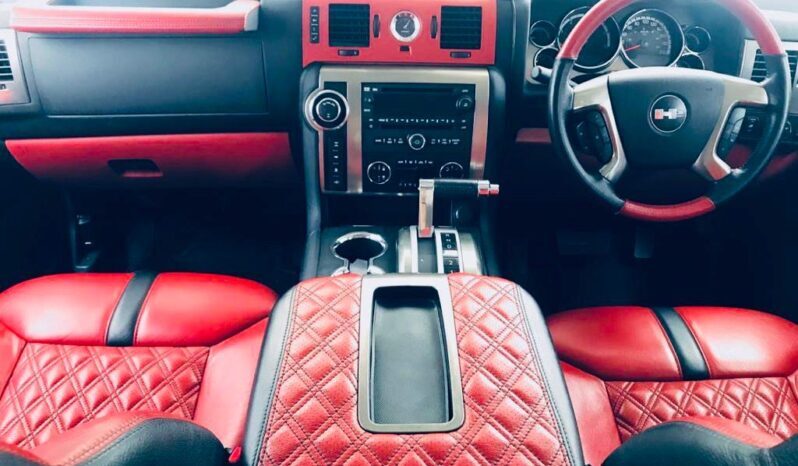 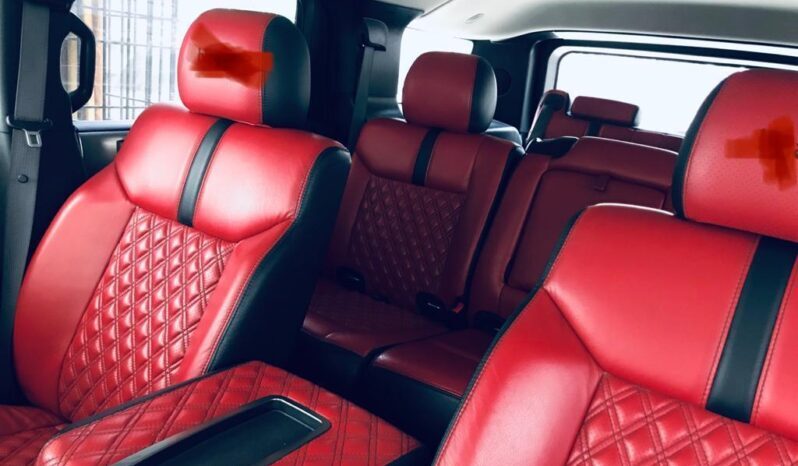 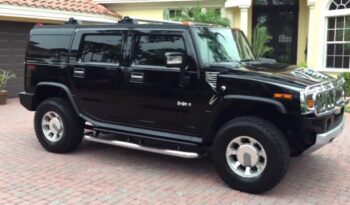 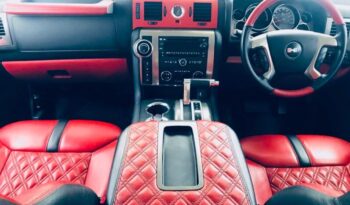 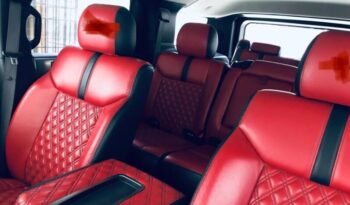 It doesn’t rain much in Baja California, but when a good storm blows through, bad things can happen. You can get flash floods that make that business with Moses and the Pharaoh’s goons at the Red Sea look like nothing more than a problem with excessive humidity.

Ruined as it is, the “road” we’re on is nothing more than a minor inconvenience for the original Hummer. With its 16.0 inches of ground clearance and fully independent suspension, the H1 requires less attention to tactics than the new H2. Instead of fretting about the terrain, usually one simply glances, aims, and drives. Wherever.

The H2, with about six fewer inches of ground clearance, requires a bit more reflection when the going gets really rough. Concerns about raising the center of gravity kept GM engineers from adding more ground clearance. That means that even though an H1 could straddle a large rock with impunity, the wise H2 driver may wish to place a tire on the rock and drive over it instead.

The H1 also has less front overhang and will approach a far steeper bank than the H2 (47.0 degrees with a winch on an H1 versus 43.6 degrees for a winchless H2). Meanwhile, the 19.8-degree approach angle of the H2’s cousin, the Tahoe, means the Chevy driver had better back up and find another way around. It can’t come close to the H2, much less the H1. Coming back down those humps into the Arroyo San Javier, the winding, occasional river that divides — and in a heavy rain probably conquers — our dirt-road trail, the H2 is no more likely to suffer butt burn than the H1.

Day after day we work through Baja’s most remote and spectacular areas. For hours we thump, slide, and scramble along, rarely seeing other vehicles or people, at most passing a few scraggly cattle. We pick our way through mountains, scoot past abandoned mines, and run along the top of a 2000-foot mesa that provides a roof-of-Baja view.

Evenings we reluctantly emerge from the splendid Baja nowhere and grab hotel rooms and cervezas — not necessarily in that order. Sometimes we chat with locals who are honestly puzzled about why we shun perfectly good paved roads.

Most of the land here is harsh and dry in that scary, empty, desolate way. Cactuses and thorny bushes make for a prickly look-but-don’t-touch landscape. Along sandy trails through this terrain the Hummers cover ground comfortably at 40 mph, slowing only a little when the surface hardens and turns to washboards.

Unlike the H1, the H2 doesn’t get an independent rear suspension. Instead, it comes with a live-axle, coil-spring, five-link arrangement with optional air springs. But the H2 is remarkably resistant, if not totally immune, to skittering over such ripples and ridges. Hit a good bump with a rear wheel, and the H2’s tail does a delicate little hop but nothing nasty.

Rounding a corner, a windshield-breaking bush intrudes on the trail, but the H2’s reasonably weighted recirculating-ball steering is quick enough to play dodgem. Meanwhile, the H2’s ride is surprisingly comfortable for a serious truck, and the GM engineers did an impressive job of balancing everything from impact harshness to control over body motions. For those who want better handling, Hall is developing a special performance suspension expected to be sold, with GM’s approval, through Hummer dealers.

Meanwhile, the H1’s steering is far lighter and more vague and the ride is harsher, with its GI Joe suspension being more eager to share impacts.

The powertrain is GM’s version of the psychic connection, quick to figure out what the driver wants, relatively quiet, smooth, and big-displacement strong. The H2 also likes gas stations: EPA fuel economy is 10 mpg city and 13 highway, although a 32-gallon tank allows reasonable range.

As a public service, the wise driver should consider the issue of stopping the H2’s considerable mass. The H2 does have four-wheel discs and a four-channel Bosch anti-lock system. However, our 6700-pound test car took 244 feet to stop from 70 mph. That compares rather poorly with the 197 feet required by our petite 5520-pound Tahoe.

One of the challenges for automakers is providing anti-lock brake systems that are suitable off-road. GM says the H2’s Bosch ABS has been specially calibrated to detect and compensate for loose or rough surfaces. On Mexican grit and gravel, the H2’s system seemed clever enough to know when and how much to intervene.

Five leisurely days after leaving Tijuana, we reach La Paz. Three days after that — mostly following paved two-lanes along the largely undeveloped, magnificent coast of the Sea of Cortez — we reach Mexicali. We cross back into California, having knocked off close to 2000 Baja miles with the Hummer family.

When it comes to performing radical, silly, and apparently ill-advised off-road maneuvers, the H1 is probably the best vehicle in the world. “It is kind of ‘no compromise, no nonsense,’ a heavy-duty military vehicle underneath,” acknowledged GM suspension engineer Thad Stump, who worked on the H2.

The H1 is also the classic Hummer, the most expensive and charismatic. For some buyers, only an H1 will do. However, the military genesis demands the H1 driver spend time learning its quirks, which include dealing with its lifeless steering and putting up with its ergonomic and packaging shortcomings.

Meanwhile, our Mexican mileage has created deep respect, fondness, and admiration for the H2. It is golly-gee easy and reassuring to drive, but it is not a Hummer poseur. It handles serious off-road chores with ho-hum ease, leaving its occupants marveling at the comfort in which they can travel through rough country. For most folks, that will make it the perfect Hummer.

FRANK MARKUS
Every time I jot down impressions of the H2, a left-handed compliment pops out: “It’s surprisingly drivable for how gigantic it is.” “The interior looks pretty distinctive for sharing so many parts with the Tahoe and Suburban.” “Wind noise isn’t bad, given all the upright, nearly flat glass on the thing.” “Off-road credentials are decent, considering AM General didn’t make any of the parts.” Let’s face it, this is one gargantuan styling statement, designed to intimidate every other SUV, save for its big brother, the H1. But trust us — those most intimidated by the H2 will probably be its drivers, whenever they attempt to park in tight quarters.

TONY SWAN
A mysterious metamorphosis occurs during the climb into the cockpit of this most militant of all Tahoe/Suburbans. The driver begins experiencing Mittyesque visions of El Alamein and Desert Storm. What we have here is a shameless appeal to latent male adolescence, with exterior styling that cries out for camo paint and machine-gun mounts. Although far more civilized than the original H1, it has few other redeeming virtues, aside from plentiful ground clearance. The love of my life called it “the male equivalent of a push-up bra,” and I find it hard to argue otherwise. But in the secret depths of my psyche, ruled by my inner 12-year-old, I love this thing.

ANDRÃ‰ IDZIKOWSKI
The original Humvee has always been great at two things, off-roading and drawing attention. Otherwise, the H1 is unpleasant to drive or ride in and impractical as a daily driver. The H2, on the other hand, is everything the H1 isn’t: comfortable, spacious, and fun to drive on-road and off-. Two days of off-roading and rock crawling outside Moab, Utah, convinced us the H2 can overcome obstacles almost as well as the H1 can (we know because we had an H1 chase vehicle) but in a much more civilized manner and for half the price. GM has done a great job of capturing the look and off-road prowess of the H1 and making the H2 a practical vehicle.