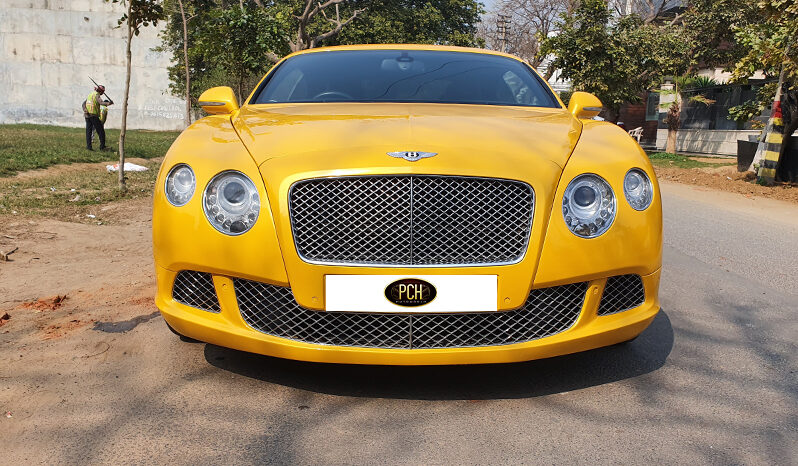 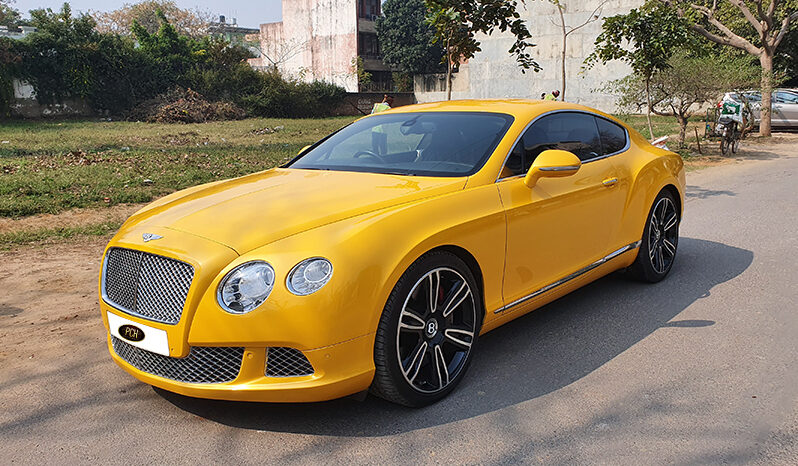 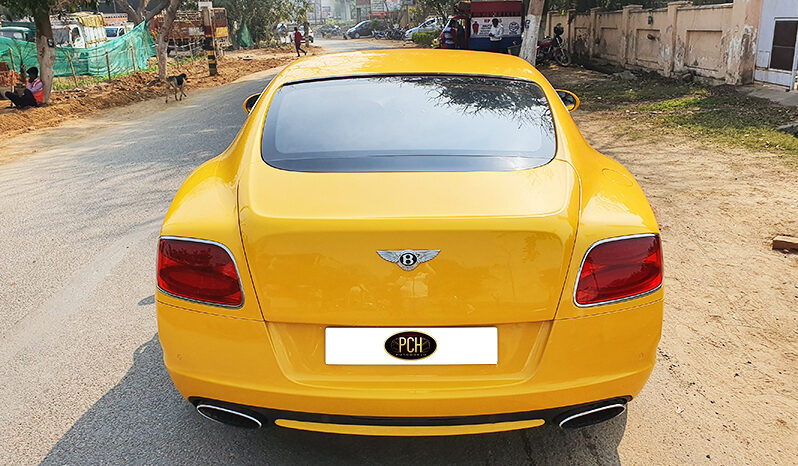 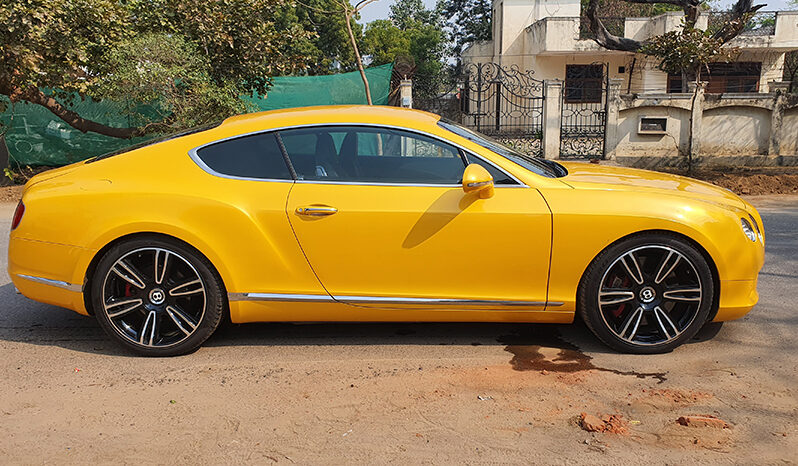 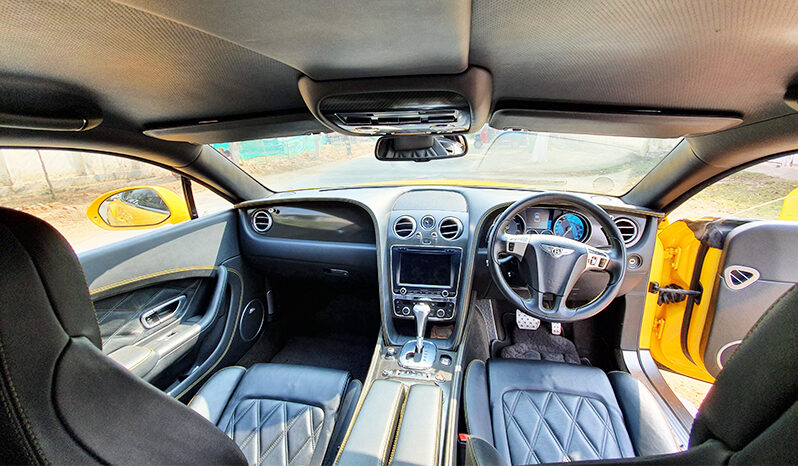 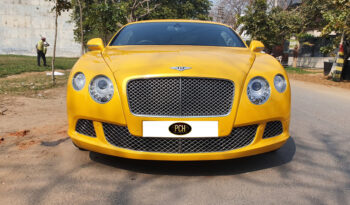 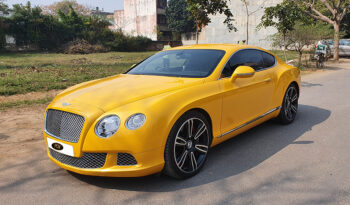 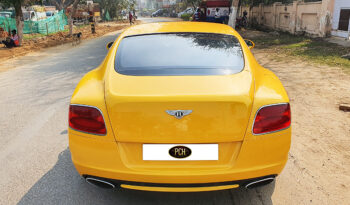 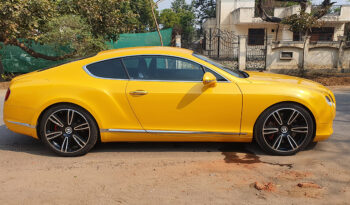 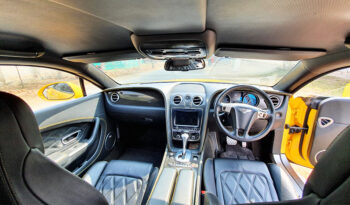 Crewe’s fastest-ever production car, with a top speed of 206mph theoretically achievable if you have nerves of steel and a long, straight stretch of derestricted road at your disposal.

The centrepiece of this updated Bentley Continental GT Speed and its performance capabilities is a reworked version of the British-built twin-turbocharged W12 engine, which has received a power increase for this 2014 upgrade.

Although Bentley’s upstart V8 powerplant has been attracting plenty of the plaudits since it was introduced, the manufacturer is keen to show there’s plenty of potential left in the 12-cylinder.

In fact, this upgrade can be seen as a reiteration from Bentley that the engine isn’t going to be pensioned off any time soon, with the Crewe manufacturing facility having recently been declared the Volkswagen Group’s centre of excellence for the W12.

In this GT Speed (which is also available as a marginally less rapid drop-top) revisions to the engine management software and turbo pressure have bumped maximum power from 616bhp to 626bhp and increased available torque from 590lb ft to 607lb ft.

The power is fed through an eight-speed ZF automatic transmission to all four wheels, with a 60:40 bias towards the rear axle.

The time taken to sprint from 0-60mph has been cut from 4.2sec to 4.0sec. If you keep your right foot planted, 100mph comes up in 9.0sec, an achievement that’s unchanged from the current car, while the aforementioned top speed is nudged up by a whole one mile per hour from its previous 205mph maximum.

As before, the Speed chassis is set-up to be the most dynamically rewarding of the cars in the Continental family.

Compared with regular Continental GT models, the Speed has a 10mm reduction in the ride height, stiffer springs, rear anti-roll bar and suspension bushes and a 15 per cent increase in the front camber angle.

This new Continental GT Speed receives some minor cosmetic tweaks too. The front splitter, side skirts and rear diffuser are now finished to match the exterior paint colour. There’s now a dark tint finish on the 21-inch alloys, headlamps and tail lamps, and new cars get red-painted brake callipers and chrome-effect ‘Speed’ badges on the front fenders.

Inside, there are some colour changes such as contrasting accents which are exclusive to the Speed models and some new ‘Speed’ badging to remind you once again than, yes, this is the fastest road-going Bentley.

No nation has ever mastered eccentricity as well as the British, and in this age of downsizing and hybridisation there’s something rather whimsical about installing a hugely powerful but wallet-crunchingly thirsty W12 engine into a motor vehicle.

Not that the type of buyer in the market for a £150,000 vehicle would give practicalities such as fuel costs much of consideration. The key question is whether this W12-powered Bentley is an anachronism in today’s motoring world or a decadent motoring delicacy to be savoured like fine art or wine.

The Continental GT Speed manages to combine prodigious power with pleasing docility and sublime comfort. With the automatic transmission left in standard ‘D’ mode, the engine produces a soft burr and excellent levels of sound insulation filter out road and wind noise.

It’s remarkably easy to drive, with the electrically assisted, speed variable steering feeling light and precise through town. On standard 21-inch wheel rims the ride is composed and the air suspension mops up most of Britain’s road scars.

It means that whether you’re behind the steering wheel or reclining in the leather seats in the rear, the Continental GT Speed has a wonderfully composed way of ensuring you arrive feeling just as relaxed as when you set off.

The big Bentley is air-sprung at all four corners and four suspension settings, ranging from the softest Comfort through to the stiffest Sport, can be selected from the menu on the infotainment screen. The differences between the softest and stiffest settings are noticeable, but the two incremental stages don’t really offer such significant differences to the extent that you’ll be forever ferreting around in the menu to select the optimum setting for any given piece of road.

Best to leave it in Comfort for cruising and occasionally switch to Sport for fun, although bumps and ridges are definitely more noticeable in the latter.

If the mood takes you, you can unleash the GT Speed’s aggressive side by pulling the gear lever into ‘S’ for Sport mode.

You could snick the lever left to enable manual shifts via the stubby paddles, although the short-of-finger might struggle to reach them, particularly when the steering wheel is at an angle, because the paddles are mounted to the column and don’t move.

Engage Sport mode and the W12 takes on a more aggressive snarl and the gearshifts become more urgent. The acceleration is simply immense; flatten the throttle from a slow speed and there’s a momentary pause as if the W12 is taking a deep breath before it explodes with a gushing torrent of forward motion. It doesn’t build speed as much as hurl it all at you in one go; within the blink of an eye you go from sedate cruising to scenery-blurring pace.

For a car with such a large presence, the Continental GT Speed hides its weight surprisingly well during cornering. It’s mass means it can never feel as nimble as a thoroughbred sports car, but it does feel very stable and has to be pushed hard to elicit any understeer.

Through fast, wide sweeping bends the steering weights up nicely and traction of the four-wheel-drive system offers tremendous levels of grip and balance, encouraging you to power through and out of corners with confidence.

Our test car was fitted with optional carbon-ceramic brakes, which do a brilliant and consistent job of slowing down the mass of 2320kg from high speeds, but cost an eye-watering £10,610. It would have been nice to have a set of those included as standard on the version of the Continental GT that’s the designated performance flagship.

After a while, though, the thrill of Sport mode can wear thin; the engine’s droning blare can become tiresome, the more sensitive throttle makes fluid driving more of a challenge and the more aggressive gearshifts offer a nudge in the back as an insistent reminder that the Continental GT Speed prefers to be fast cruiser as opposed to a sports car.

Should I buy one?

When it comes to real-world driving, the performance increases delivered by this latest Bentley Continental GT Speed don’t really alter its character; it remains as brutishly fast as you could ever want from a beguilingly comfortable luxury cruiser.

As pure driving experiences go, we still prefer the V8-engined Continentals, because they handle sprightlier, sound as good (if not better) and retain plenty of charisma.

The majority of luxury car buyers, however, are the kind of people who insist on the best in life, so it’s little surprise that many will plump for this W12, due to the significant cachet of it being the fastest production Bentley ever.

The Continental GT Speed is excellent as a lavish fast cruiser and quite good as a mind-curdling performance machine. Either way, it serves to add lustre to Bentley’s canon of high-speed grand touring machines.